Maintaining bespoke CSS for websites can be hard. Using a CSS framework, such as Bootstrap, Bulma, or Foundation, seems like a good idea.

A CSS framework will give you lots of default CSS and JavaScript functionality out of the box, including a huge list of components, such as:

Once setup, you can add your own bespoke CSS to override the defaults and make your website match your design and branding. Alternatively, you can take the complex approach of replacing the defaults with custom values by precompiling the source SASS yourself. Only then can you start to build bespoke components on top of that framework.

The problem with CSS frameworks

There are several problems with CSS frameworks that could make you think twice about using one. Below are a few reasons why a framework could hold you back, reduce your productivity, and make CSS maintenance harder for you.

Frameworks are opinionated, generating classes even though you have not asked for those classes. Frameworks also define what default styles are applied to a class and dictate the HTML markup needed to display correctly.

Overriding default styles adds extra lines of code, which increases the file size. In addition, you are not likely to use every component shipped with a framework. It is critical to use a tool to remove unused styles, such as PurgeCSS. As the project ages, the CSS file size will continue to grow as you add new template designs and custom components.

Frameworks do a good job of giving you lots of components that are great looking, consistent, and accessible. So why would you want to change the default styles? If you only make slight changes, or no changes at all, your website could start to look like other websites using the same framework.

After several months of not working on a website, it can be difficult to jump back into a project and start developing straight away. It is time consuming trying to remember the website setup and framework used. You can only start to make changes once you are up to speed.

Unless you are familiar with a framework, you will need to learn the syntax for the CSS and HTML. Classes are likely to be named semantically (describing its use or role). In Bootstrap, a nav-bar class is used for an element containing a navigation menu, which makes sense. To correctly implement a nav-bar, you must know all the classes used and the markup structure. Syntax is not always intuitive, and you will need to refer to documentation.

Once you understand the class syntax, it is important to use the framework as intended. A btn class describes that it will add button-like styles to a HTML element. The class should be added to a <a> or <button> element, but there are no restrictions to stop a developer from adding the class to a <span>. Reusing the class for consistent styling seems like a good idea, but the semantic, descriptive naming has suddenly lost its meaning.

Whether you are creating bespoke CSS or a framework component, naming is hard. Semantic class names, descriptive of its role or use, are much harder to name as websites grow, with lots of components starting to share similar design ideas and characteristics… assuming the name you come up with hasn’t already been used.

It is possible, especially for inexperienced CSS developers, to lose knowledge of the underlying CSS used by a framework. Multiple styles are abstracted behind descriptive class names. Unless you are overriding default styles, or inspecting the generated CSS, there is no need to see what border or padding values are being set for a component.

The biggest problem with bespoke CSS and frameworks is the risk when making changes. You must be aware of what will be affected when you make a change. If you add, edit, or delete styles, it can have adverse effects on another template. Content management systems (CMS) and JavaScript plugins might apply classes dynamically, making it harder to search for what classes are being used.

Alternatively, you can use an unopinionated approach, such as utility-first CSS, which removes the problems caused by using bespoke CSS or frameworks.

In fact, most CSS frameworks already have some utility classes in their systems. Bootstrap has a large list of utility classes to let you add styles alongside components, including:

If you have used Bootstrap, you may have used its margin utility classes, such as mb-{x}:

Getting started with utility classes

Let’s create a card component with bespoke CSS. The card design (see image below) must have: 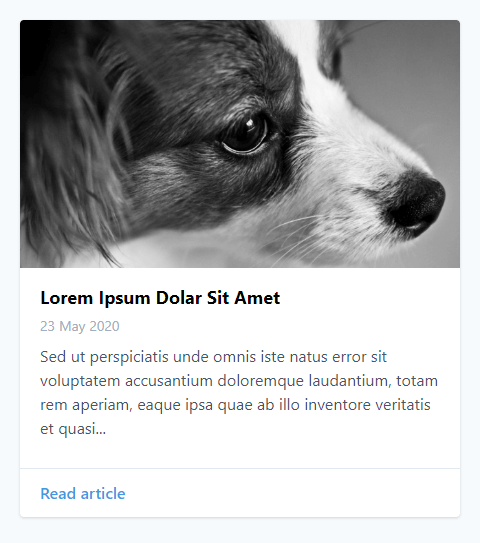 With bespoke CSS, you need to think of the names for your classes. To reduce the risk of breaking your design if you change the element later, avoid using HTML elements in your CSS selectors. The HTML snippet below is an example of good, semantic markup with some appropriately named classes to style the component:

First, let’s see how you could style the card component using bespoke CSS:

Additional styles may be needed to override any browser styles or reset stylesheets, but the media-card component is now ready to be used across multiple templates. Brilliant.

However, there are some questions about re-usability, maintenance, and expansion with the CSS snippet above:

The core problem with this approach is style duplication. In the CSS snippet, the media-card-body and media-card-footer-link both use the same padding left and right values. What if the media-card styles for background and shadow are also widely used on your website? Maybe you have tweet-card and menu-card components that use those styles. The margin top of the media-card-summary may also be a common spacing pattern in your design. You could set these values as CSS properties or SASS variables to stop you repeatedly writing values out if you want to make changes. But you are still duplicating the styles in your CSS, which increases file size.

With Tailwind CSS, reusing utility classes removes style duplication. Your productivity is increased as you no longer need to worry about naming classes or editing styles. The risk when making design changes is gone as you change the classes added to HTML elements and you never edit the CSS.

The padding classes have been reused for the card body and the card footer link. If you also wanted to apply the same background (bg-white), rounded corners (rounded), and shadow to other elements in your design, your CSS would only need to be aware of those three classes used once:

With utility-first CSS, you still learn and maintain a deep understanding of how to write CSS in a traditional, bespoke way… but you no longer need to worry about writing it.

Karl is an experienced developer and Umbraco MVP, specialising in user interface development. He is also a co-organiser for umBristol, the Bristol Umbraco User Group.